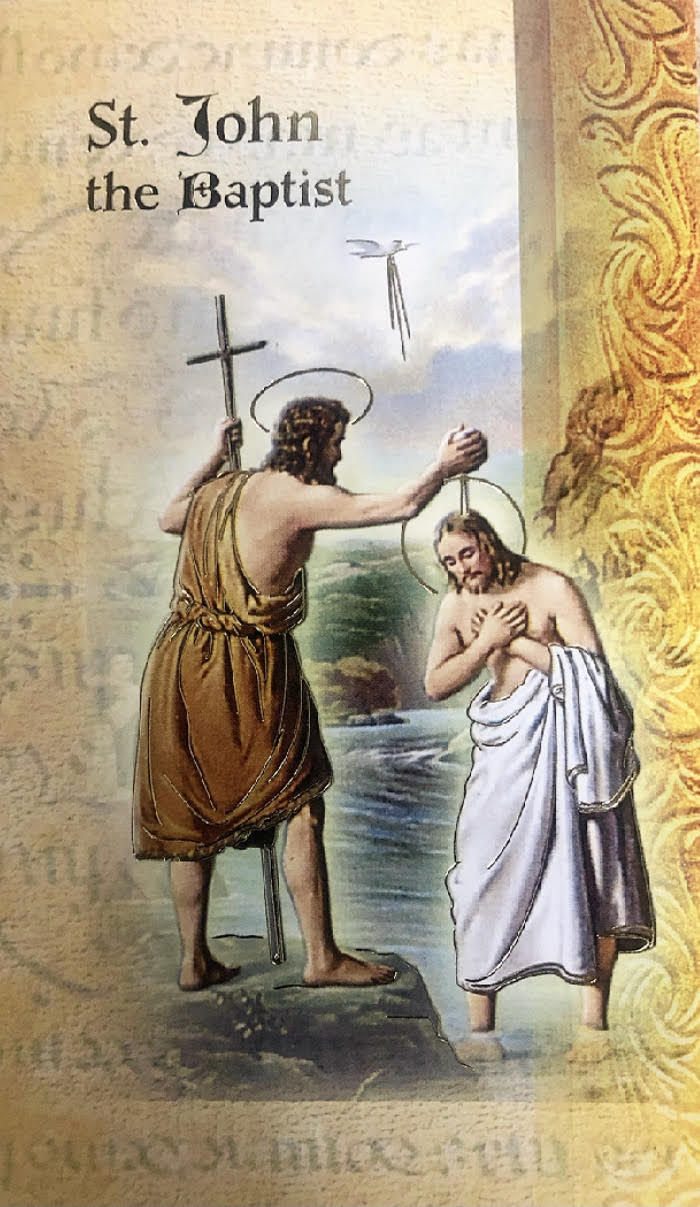 O God,
You raised up St. John the Baptist
to prepare a perfect person for Christ.
We call upon St. John’s intercession
to properly prepare us with a true
sense of repentance to receive Your
grace and salvation.
Make us faithful to Truth and justice,
as You did Your servant,
John the Baptist, herald of Your Son’s
birth and death. Lord, may You increase
Your life within us.
Amen.

The birth of St. John was foretold by an angel to the Lord to his father, Zachary, who was offering incense in the Temple. It was the destiny of St. John to prepare the way of Christ. Even in the womb, St. John knew the presence of Jesus and of Mary — leaping with joy at the glad coming of the Son of man. In his youth he remained hidden, because Jesus’ life was hidden also.

But before Christ’s public life began, a divine impulse led St. John into the desert where in silence and in prayer, he began to purify his own soul. Then, as crowds broke in upon his solitude, he wanted them to flee from the wrath to come, and gave them the baptism of penance with water, while they confessed their sins. At last there stood in the crowd One whom St. John did not know, until a voice from within told him that it was his Lord, Jesus Christ.

With the baptism of St. John, Christ began His ministry for the sins of His people, and St. John saw the Holy Spirit descend in bodily form upon Him. At that point the Saint’s work was completed. He had but to point his own disciples to the Lamb of God; he had but to decrease as Christ increased (Jn 3:30). “I told you,” he said, “that I am not the Christ.” He then saw all men leave him and go to follow Christ.

St. John was beheaded soon after by Herod and his wife, Salome, for boldly rebuking them for their scandalous lifestyle of adultery. He died as the first martyr and final prophet about one year before the crucifixion of our Lord and Savior, Jesus Christ.

What made John the Baptist great?

St. John’s greatest strength was his focused and faithful commitment to the call of God on his life. Taking the Nazirite vow for life, he personified the term “set apart for God.” John knew he had been given a specific job to do and he set out with singular, unwavering obedience to fulfill that mission. In other words, John the Baptist is known for pointing man beyond this life to to the Cross.

What did Jesus say about John the Baptist?

Jesus called John the Baptist the “greatest prophet.” He said that John’s mission had been prophesied throughout Holy Scriptures, and that he was His forerunner and God’s messenger. John lived his years in the wilderness preaching a message of repentance and the coming Kingdom of Heaven which was now at hand in Jesus.

0 comments on “Powerful Prayer to Saint John the Baptist”