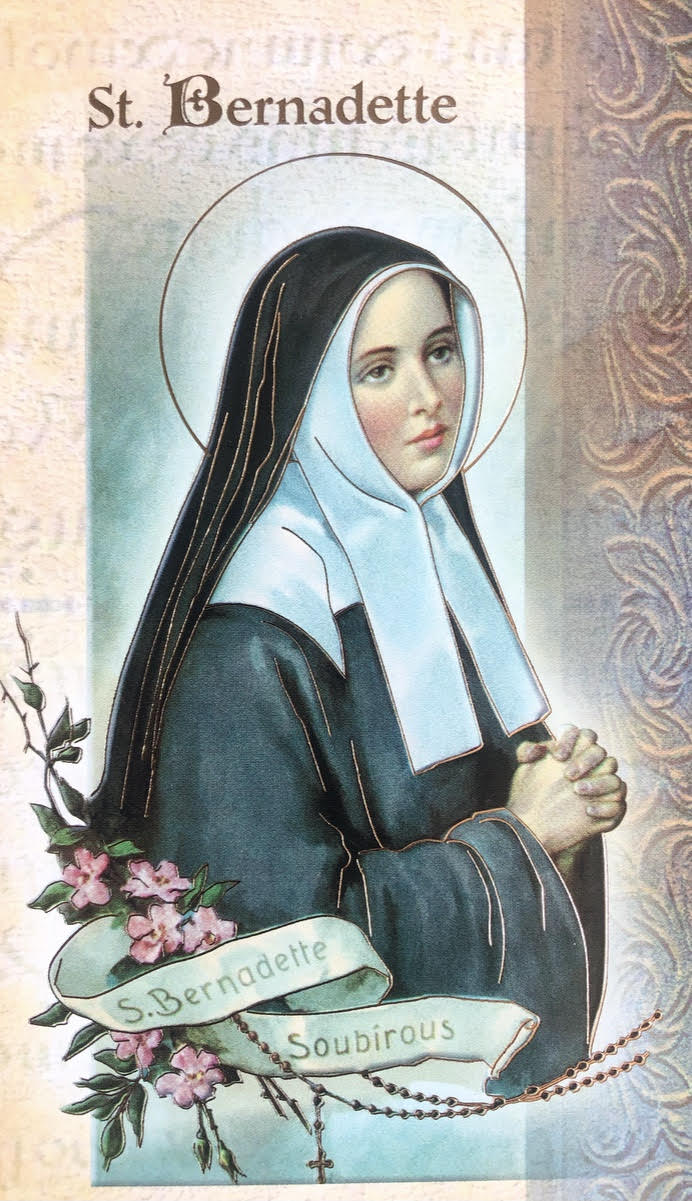 St. Bernadette,
pure and simple child,
you who were privileged to behold
the beauty of Mary Immaculate
and to be the recipient of her confidence
eighteen times at Lourdes;
you who did desire from then on
to hide yourself in the cloister of Nevers
and there live and die as a victim of sinners,
obtain for us that spirit of purity,
simplicity and mortification,
which will lead us also to
the glorious vision of God
and of Mary in Heaven.
Amen.

Bernadette Soubirous was born in a humble home in southern France on January 7, 1844. As a child, her health and her parent’s poverty forced them to send her away to live with friends. But to prepare for First Holy Communion her mother insisted she return home. Soon after, while gathering wood near Lourdes (France), Bernadette first saw the vision of Our Lady in the grotto. Seventeen times over the frail little girl beheld the wonderful vision. She saw Our Lady for the last time on earth on July 16th, 1858.

Eight years later, while great numbers of pilgrims continued to visit the grotto, the Bishop eventually pronounced the visions as authentic. Inspired by these apparitions, Bernadette then entered the convent and became a sister of charity.

Her death in 1879 ended a life of illness and pain. Thirty years later, as Church authorities investigated her claim to sainthood, her body was exhumed and was found perfectly preserved. From the center of Christendom, St. Peter’s in Rome, amidst majestic ceremonies of canonization, Pope Pius XI on December 8, 1933, the Feast of the Immaculate Conception, proclaimed her name to the entire world — Saint Bernadette.

What did Bernadette experience as a child?

As a young and frail 14 year old girl, Bernadette Soubirous had multiple visions of the Blessed Lady in a grotto in the outskirts of Lourdes. A few years after her reported vision, she became a nun and took the name Sister Marie Bernarde. She was later canonized as a Saint by the Catholic Church.

Is the Song of Bernadette based on a true story?

The Song of Bernadette, novel by Czech-born writer Franz Werfel, published in 1941 in German as Das Lied von Bernadette, the book is based on the true story of a peasant girl of Lourdes, France, who had visions of the Virgin Mary.

What was the message of Lourdes?

How many miracles are believed to have happened at Lourdes?

Since 1858, there have been 69 verified miracles or “unexplainable cures” in Lourdes.

What was the last miracle at Lourdes?

A miracle at Lourdes was last declared in 2013. It involved an Italian woman who visited Lourdes in 1989 suffering severe and acute rheumatism, high blood pressure, and other health problems, and was miraculous healed.

Prayer to the Immaculate Heart of Mary
Other Powerful Prayers, Novenas and Saints: Click Here