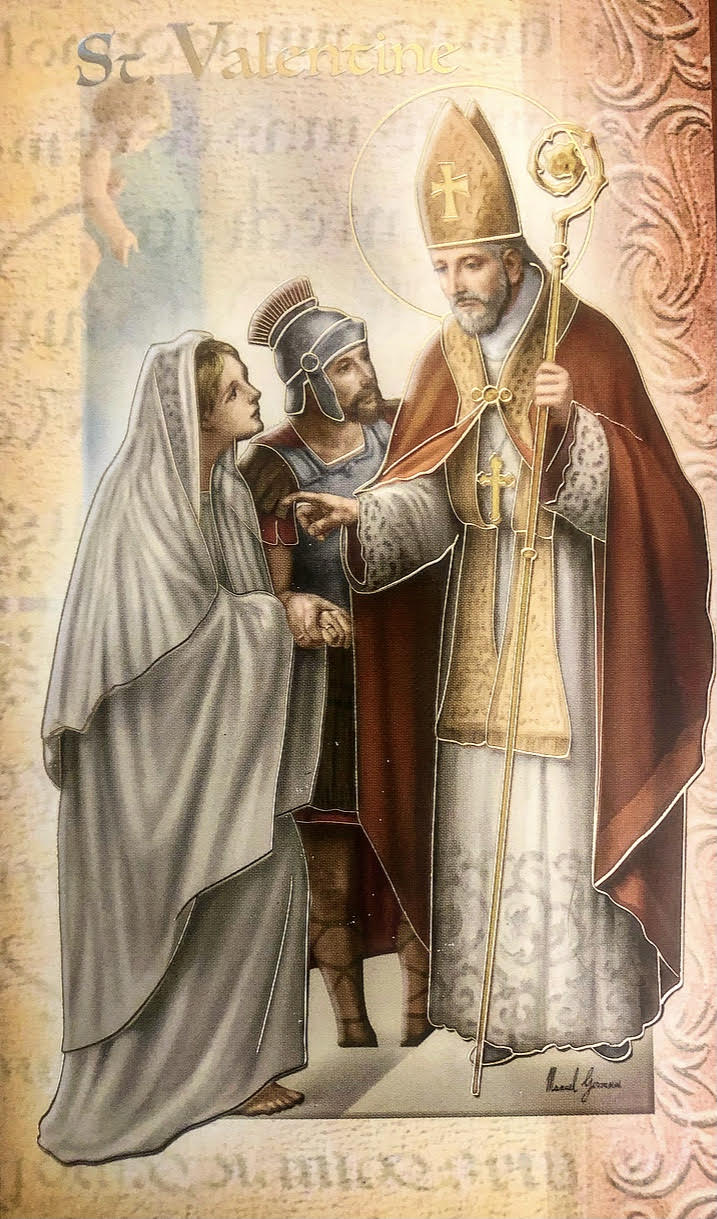 Who Is The Real Saint Valentine?

Believe it or not, Valentine’s Day is not just about flowers and chocolate. While those sentiments for our loved ones are certainly sweet, the history of Valentine’s Day is what makes it so special. This day of love is actually named after a real and holy saint. San Valentino (St. Valentine) was a Third Century Roman priest and martyr during the reign of Claudius II, known as Claudius the Goth. He was arrested for helping Christians who were being persecuted by Claudius in Rome and for performing marriage ceremonies between young Christian couples in love. While imprisoned and under threat, Saint Valentine would not sway from answering questions of the Emperor regarding his beliefs.

The emperor tried to no avail to convert Saint Valentine. Regardless of what was asked, however, Valentine would not renounce his faith so Claudius had him sent away to prison. The guard where Valentine was imprisoned listened as he preached day in and day out. As the legend goes, the guard, Asterius, had a daughter who was blind. He asked Valentine to hear her confession in which he did. Afterwards, Valentine put his hands over the girl’s eyes and chanted: “Lord Jesus Christ, enlighten your handmaid, because You are God, the True Light.” Immediately the little girl regained her eyesight. Because of this miracle, the guard and many of his family members converted to Christianity and were baptized. Upon hearing of the conversions, Emperor Claudius condemned all of them to death.

The night before his execution, Valentine wrote the young girl a note and signed it, “From your Valentine.” Valentine was then beaten with clubs, stoned and finally beheaded on February 14th, around the year 269. He was buried on the Flaminian Way where a chapel was later built over his remains. On the same day, another Valentine, bishop of Terni, was imprisoned and beheaded by Placidus, prefect of Terni, about sixty miles outside of Rome. Many believe mysteriously that the two are one and the same priest — the same Valentine who was earlier brought to Rome for execution and buried on the Flaminian Way.

O glorious advocate and protector,
St. Valentine,
look with pity upon our wants,
hear our requests,
attend to our prayers,
relieve by your intercession,
the miseries under which we labor,
and obtain for us the divine blessing,
that we may be found worthy
to join you in praising the
Almighty for all eternity:
through the merits of
Our Lord Jesus Christ.
Amen.

Dear Saint and glorious martyr,
Teach us to love unselfishly and
to find great joy in giving.
Enable all true lovers to bring
out the best in each other.
Let them love each other in God
and in God in each other.

Love is patient and kind,
It doesn’t envy or boast
and it’s never proud.
Love is not rude or selfish,
It doesn’t get angry easily,
or keep track of wrongs.
Love doesn’t delight in bad
things but it rejoices in the
truth. Love always protects,
trusts, hopes and perseveres.
Love never fails.
– St. Paul to the Corinthians

0 comments on “Who Is The Real Saint Valentine?”