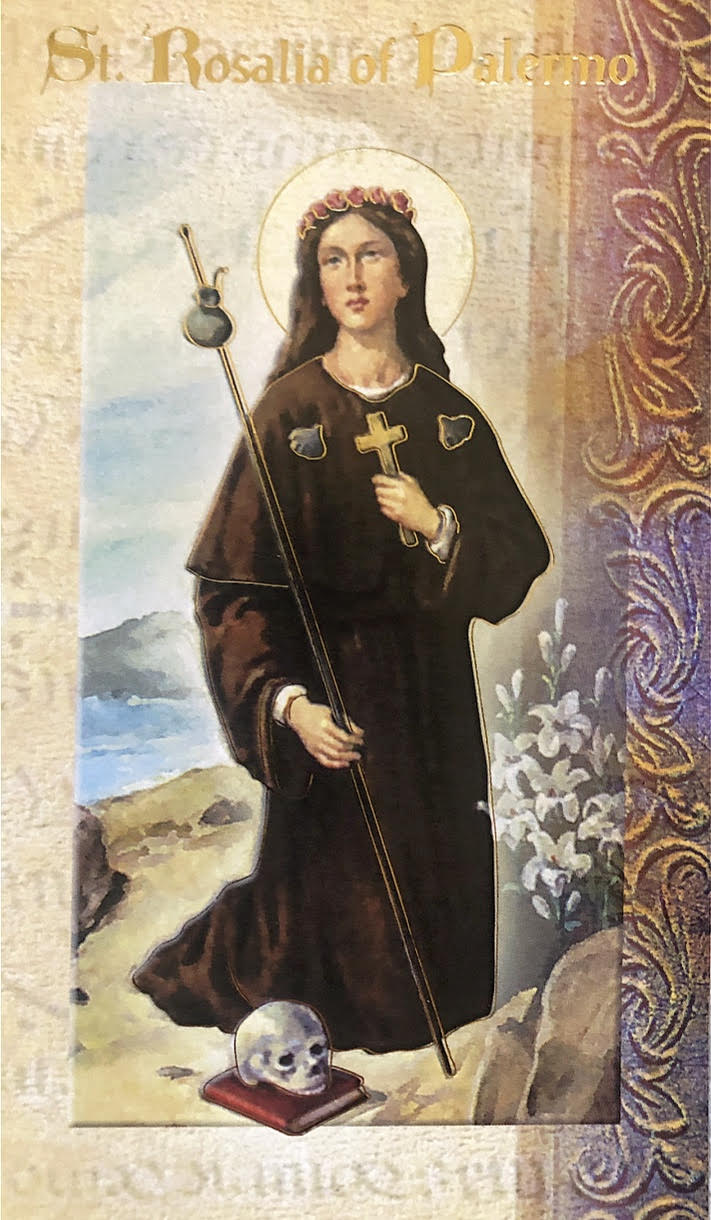 About “The Little Saint” — Saint Rosalia of Palermo:

Rosalia was born in 1130 in Sicily. She was the daughter of Sinibald, Lord of Roses and Quisquina, a descendant of Charlemagne. When she was young, she left home to live in a cave near Bivona so as to sacrifice (surrender) her life to God. She later moved to another cave on Mount Pellegrino near Palermo, and ended up dying in that cave in 1166. On the walls after her passing were found these words: “I, Rosalia, daughter of Sinibald, Lord of Roses and Quisquina, have taken the resolution to live in this cave for the love of my Lord, Jesus Christ.”

It is told that in 1624, a terrible plague broke out in Palermo. Saint Rosalia appeared to a very sick woman and then to a hunter. She told the hunter to go to the cave (in which she had died), and to bring her bones to Palermo and have them carried in a procession through the streets. The hunter climbed to the cave and found the remains just as St. Rosalia had told him. He arranged a procession to have her relics carried through the city. Three days later, the plague ceased completely. A sanctuary was then built in the cave where the hunter found her remains. Every year since then, on July 15th, a celebration is held in Palermo called the ‘festino’. On her feast day, September 4th, the tradition of walking barefoot from Palermo up to Mount Pellegrino honors Saint Rosalia.

Rosalia is sometimes referred to as “The Little Saint” and is pictured as a young woman wearing a crown of roses and holding either flowers, a book, or a cross. To this day, she is known as the Patron Saint of Palermo, Sicily and El Hatillo, Venezuela.

“O God, our Father,
You are offended by sin
but pleased by penance.
Mercifully look upon Your people
who come to You and grant,
through the intercession of St. Rosalia,
who turned away from earthly
delights to the joys of contemplation,
that we may be delivered
from the consequences of our sins
and those of the world
through Jesus Christ, our Lord.
Amen.”

0 comments on ““The Little Saint”–Saint Rosalia of Palermo”