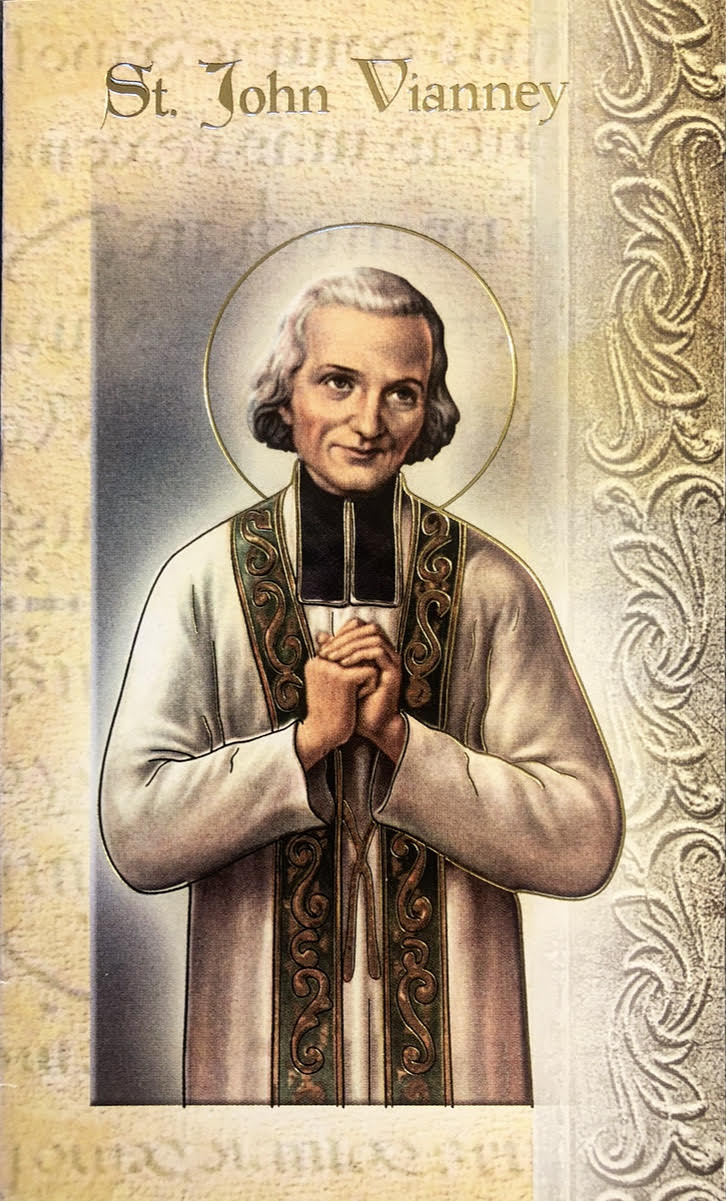 St. John Vianney was born in 1786 in France, the son of a shepherd. At age twenty, he began studying for the priesthood and after a short stay in the army, returned to study at Lyons seminary. John was not a good student and because of his difficulty with Latin, had to be tutored. His goodness and piety led to his ordination in 1815. Three years later he was made the parish priest of Ars, a small village.

Known as the Cure of Ars, he spent his life preaching, hearing confessions and living his life constantly in pursuit of the heart of Jesus. he visited his parishioners, especially the sick and the poor. He fasted and prayed and spent many sleepless nights for the intentions of his people. He often spent up to sixteen hours a day in the confessional, reminding people of sins they had forgotten and did not want to confess. His reputation spread and crowds of people came to him from all over the world for spiritual advice and reconciliation. It was told that he multiplied loaves of bread for his orphanage, La Providence. He was known for bringing thousands back to the Catholic church. Refusing all offers of promotions and honors, John remained at Ars his entire life. His works of charity and love and conversion were known throughout the world. He died in 1859.

Your childhood dream was to be a Priest,
to win souls for God.
You endured years of toil and humiliation
to attain the Priesthood.
You became a priest truly after God’s own heart,
outstanding in humility and poverty;
prayer and mortification.
Totally devoted to the service of God’s people,
the Church has exalted you as a model
and patron saint of all Priests,
trusting that your example and prayers
will help them to live up to the high
dignity of their vocation,
to be faithful servants of God’s people,
to be perfect imitators of Christ the Savior
Who came not to be served but to serve,
to give His Life in ransom for many.

Pray that God may give to His Church today
many more priests after His own Heart.
Pray for all the priests under your patronage,
that they may be worthy representatives
of Christ the Good Shepherd.
May they wholeheartedly devote themselves
to prayer and penance;
be examples of humility and poverty;
shining models of holiness;
tireless and powerful preachers of the
Word of God; zealous dispensers of God’s
grace in the Sacraments.

May their loving devotion to Jesus in the
Eucharist and to Mary, His Mother,
be the Twin Fountains of fruitfulness
for their ministry.
Amen.”