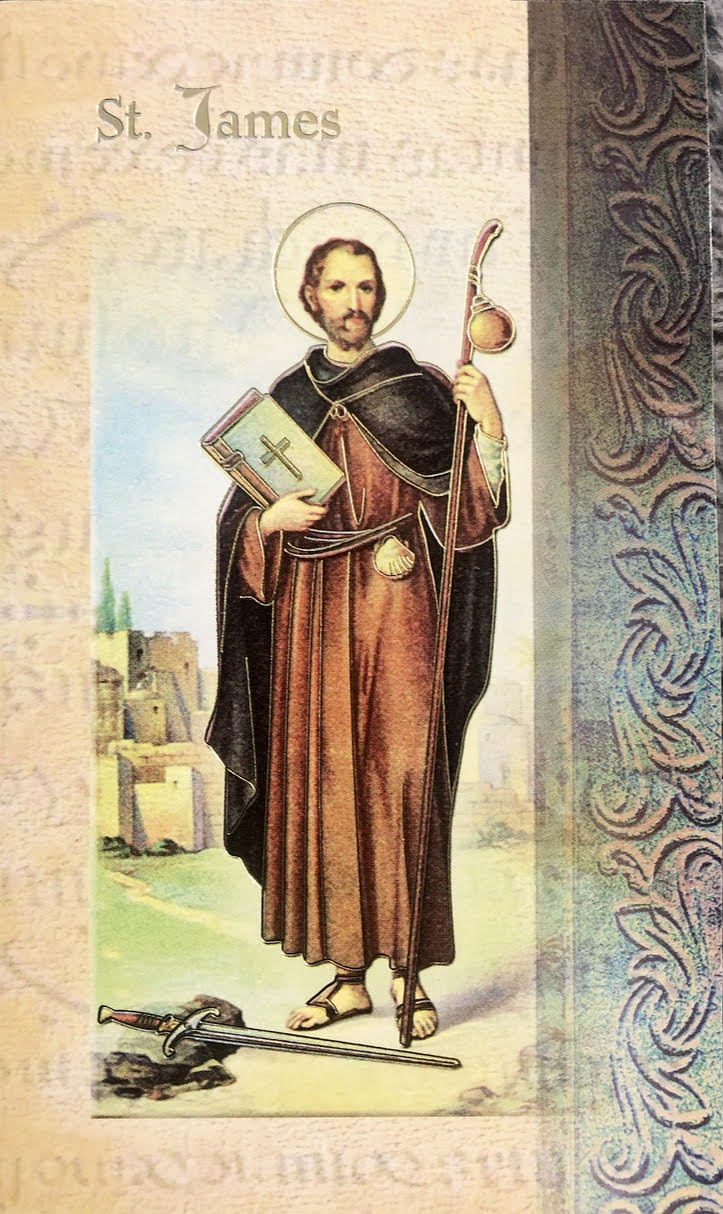 “O glorious Apostle, Saint James,
who by reason of thy fervent
and generous heart, was chosen
by Jesus to be witness of His
glory on Mount Tabor, and of
His agony in Gethsemane;
thou, whose very name is a
symbol of warfare and victory:

Obtain for us strength and
consolation in the unending
warfare of this life, that,
having constantly and
generously followed Jesus,
we may be victors in the
strife and deserve to receive
the victors crown in Heaven.
Amen.“

Among the twelve apostles, three were chosen as the familiar companions of our Blessed Lord and of these James was one. He, alone with Peter and John, were admitted to the house of Jairus when the dead woman was raised to life (Mark 5:35-43).

They alone were taken up to the high mountain and saw the face of Jesus shining as the sun and His garments white as snow (Luke 9:28-32), and, these three alone witnessed His agony of Gethsemane (Matthew 26:36-46).

It was James who demanded fire from Heaven to consume the inhospitable Samaritans (Luke 9:51-56), and who sought the place of honor by Christ in His Kingdom (Matthew 20:20-28).

When St. James was brought before King Herod Agrippa, his fearless confession of Jesus crucified so moved the public prosecutor that he declared himself a Christian on the spot. Accused and accuser were hurried off together to execution, and on the road the prosecutor begged for James’ forgiveness.

The Apostle had long since forgiven him, but hesitated for a moment whether publicly to accept as a brother one still unbaptized. God quickly recalled to him the Church’s faith, that the blood of martyrdom supplies for every sacrament, and falling on his companion’s neck he embraced him with the words, “Peace be with you!” Together then they knelt for the sword, and together received martyrdom (Acts 12:1-3).

His relics are in Compostela Spain where he is Patron Saint of pilgrims. The Spanish army would ride into battle with the cry “Santiago!” (Saint James).