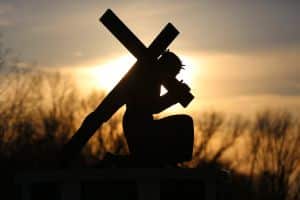 God Does His Greatest Work in Times of Trial and Persecution

During one of His most well-known sermons, Jesus said that He causes the sun to rise “on the evil and the good”; that He sends rain on both “the righteous and the unrighteous”(Matt 5:45). He also warned that in this world we will have trouble (Jn 16:33).

One of the biggest challenges to a Christian walk is retaining the virtue of perseverance in order to push through times of difficulty. Unfortunately, there are far too many sermons given today falsely claiming that believers will not experience problems or difficulty if they serve the Lord. Holy Scripture itself refutes this. In fact, Scripture is very clear that God will not spare His children from trials (think about Jesus!); rather He uses them to prepare a soul for what He has planned.

Psalm 66:10-12 states: For you, God, tested us; you refined us like silver. You brought us into prison and laid burdens on our backs. You let people ride over our heads; we went through fire and water, but you brought us to a place of abundance. The words in this Psalm tell us that God not only allows us to pass through valleys “of the shadow of death,” He uses these experiences to shape and mold us into the warriors He needs us to be.

I have become a fan of a television show in which contestants have to forge knives out of raw steel in a short amount of time. Watching what the steel goes through as the crafters fashion it to the desired shape is fascinating — heating, hammering, bending and grinding it at record speed. The contestants often return to one of the processes several times in order to rid the medal of imperfections in order to withstand the final tests of the judges. This process reminds me of what God does to a soul during times of trial.

In light of this, Ephesians 2:10 tells us: “For we are God’s handiwork, created in Christ Jesus to do good works, which God prepared in advance for us to do.” Then in both Isaiah 45:9 and Romans 9:20, we are compared to clay in the hands of a potter. Toward the end of one of his visions, Daniel is told by an angel: “Many will be purified, cleansed, and refined by these trials. But the wicked will continue in their wickedness, and none of them will understand. Only those who are wise will know what it means.”

Hebrews Chapter 11 verses 35 through 38 speaks to this point: “Others were tortured and refused their release, so that they might gain a better resurrection. Still others endured mocking and flogging, and even chains and imprisonment. They were stoned, they were sawed in two,they were put to death by the sword.They went around in sheepskins and goatskins, destitute, oppressed, and mistreated. The world was not worthy of them. They wandered in deserts and mountains, and hid in caves and holes in the ground.”

Somewhere along the way, we have forgotten the lessons and traditions that have been passed down to us from the saintly lives of Joseph, Job, David, Paul and so many others. People of faith who faced times of severe sickness, persecution, loneliness and loss. It was during these trials that the skills and virtues needed to carry out God’s plan was produced. It was indeed the difficulties that brought them closer to God and created courageous and unwavering faith.

Think again of the contestants on the knife-welding show. They start out with a less than pristine piece of steel, sometimes even rusted pieces – a good analogy for the state we are in when we begin (again and again) along the pathway with the Lord. We are no doubt in far less than pristine condition. But as the Master Craftsman, He is able to rid us of our imperfections “by fire”  — by trials, difficulties and suffering — so that we too can withstand the pressures of life and become the diamonds He knows that we are.

So when we pray to God for Him to purify our hearts in order to walk righteously with Him, believe that He will do it. And when the challenges come, do not be fooled into thinking that God has removed His hands from you. Rather, this is when the Master’s hands are on you the most. God is still (and will forever be) on the Throne; His sovereignty and justice remains no matter how difficult the times become. As you courageously carry your cross today, prayerfully meditate on the Scriptures – God’s Word to you – within this article. While you do, ask God to show you all that He is teaching you; work diligently with His grace so that He may accomplish all the good work He has planned for you. Remember, the Lord disciplines and shapes those He loves. So take heart my friend! Jesus is with you and He has overcome the world.