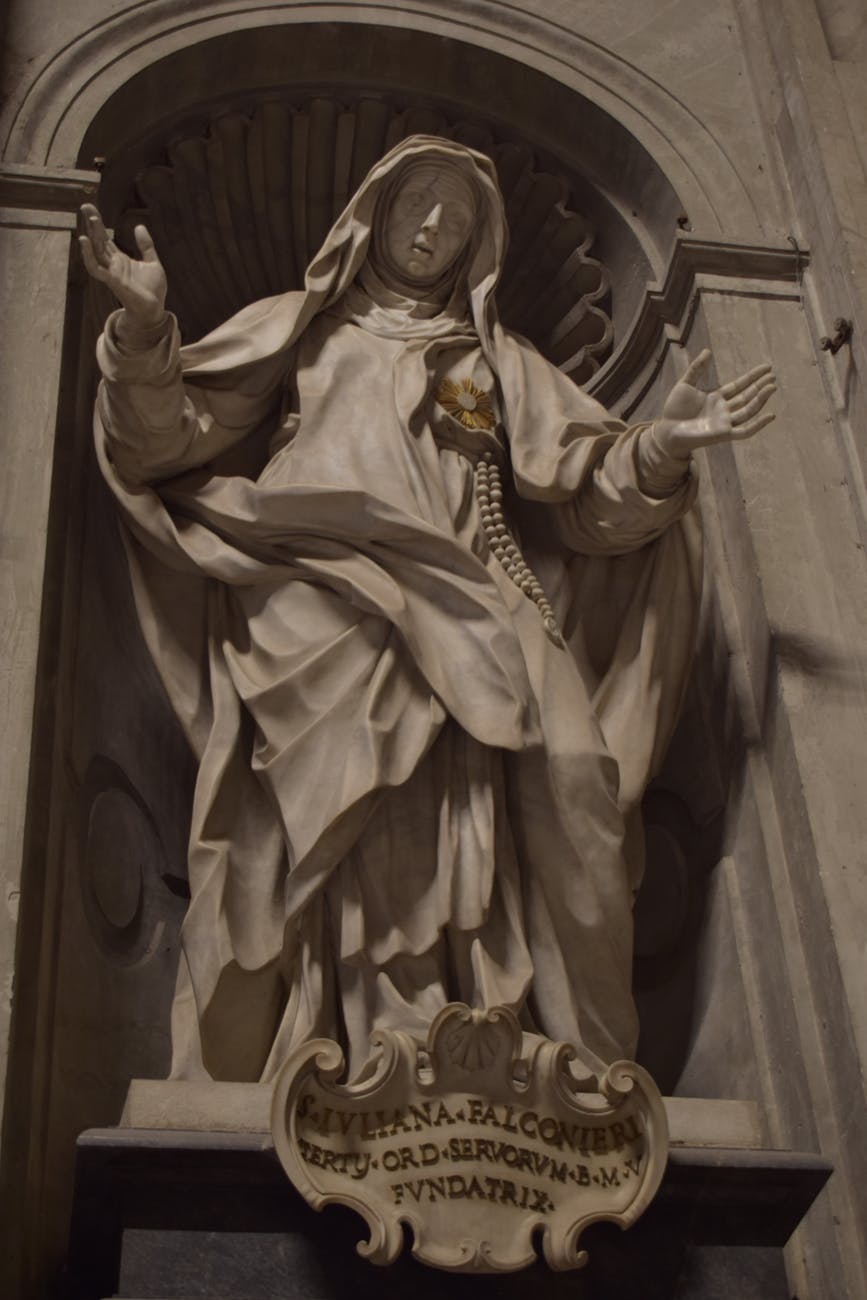 Usually when we think of “leading ladies” we think glamour, fame, success, and beauty; but probably not sacrifice, spirituality, chastity, self-discipline or simplicity.  The leading ladies referred to in this article are all about leading us closer to God and deeper in faith.

Here is an introduction to some of the remarkable women who’ve led the charge for God in one way or another…and, ultimately, leaving us an example of faith and courage to follow.  While this article is by no means comprehensive, it will hopefully inspire you to learn more about women of the Bible, and to discover additional inspirational Christian women along your faith journey.

Leading Women of the Bible

Mary’s all-important and eternal role almost goes without saying.  The Archangel Gabriel delivered the news that she had found favor with God; that she was chosen to carry the world’s Savior, Jesus, in her womb.  In her great humility she answered, “I am the Lord’s servant.  Let everything you’ve said happen to me” Luke 1:38.

We can learn a lot from the mother of our Lord.  Throughout history for example, God has seemingly favored choosing people who by outward appearances don’t seem to offer much.  Yet, God is always looking for people with a sense of humility about themselves and an awe of Him.  Mary also displays ultimate courage, showing us that we can trust God in all things; we can worship Him regardless of how our circumstance(s) appear.  By studying Mary’s strong worship life and following her example, we can experience a more vibrant faith walk in our own lives.

When we first meet Sarah in Biblical text, we are gradually told three things about her:  She is beautiful, she does not have children, and she isn’t getting any younger.  For the ancient Israelites, children were the promise for the future.  Not to have children was considered a tragedy…and sometimes even a curse.

When the Lord tells Sarah she will have a child at her advanced age, Sarah believes this promise to be impossible.  In fact, her response is laughter and her reasons are rational: she (around 90 years old) and Abraham (around 100) are too old to have children, and nothing they had done before had helped.  Sarah, like so many women and men, defined what was possible for herself by looking at age and her life experiences.

Sarah is not the first (nor will she be the last) person to think that what God wants is impossible.  Up to this point, it had been Abraham who received God’s promises and Sarah had stood by him.  Now, it is Sarah who is the center of God’s attention, teaching us that even those who live behind the scenes and out of the spotlight, who quietly go about their day-to-day lives, are no less able to be recipients of God’s great grace and attention.  It also reminds us that nothing is impossible with God (Luke 1:37).

We know nothing about Rahab except for the word used to describe her in Scripture; the Hebrew word for harlot or prostitute.  Such women were marginalized in Israelite society during that time.  Since Scripture mentions Rahab’s father, mother, and brothers, we might imagine that she is supporting them or helping to pay off family debt in the only way she can or knows how to.

Because of Rahab’s occupation, the ancient Israelites would not have expected much good to come from her, yet it is she who hides “the spies” from the king of Jericho at great risk to herself.  Rahab believed that the God these strangers worshipped was the Lord of Heaven and earth, Elohim.  All she asks is that these strangers spare her family when the time came for the conquest of Jericho.

Rahab, scorned as a prostitute, knew that even strangers deserve hospitality.  She shows that sometimes we must sacrifice a little bit of ourselves in order to make life better for others—and, that oftentimes God will use those acts of charity to bless and protect us (and our families) in return.  The story of Rahab also shows that God will work wonders through those we might judge as wholly inadequate.

When her husband dies, Ruth chooses to return with her mother-in-law, Naomi, to Israel.  She speaks the line for which she is most remembered: “Wherever you go, I shall go; wherever you lodge, I shall lodge.  Your people will be my people, and your God, my God” (Ruth 1:16)

By accompanying Naomi back to Israel, Ruth was saying that Naomi was family and that she trusted that she, a foreigner, would (or should) be welcome.  For her part, Naomi recognized the importance of home and belonging for Ruth.  It is Naomi who urges Ruth to lay her claim on Boaz, a wealthy landowner of Bethlehem.  When Ruth and Boaz finally marry, their son becomes the father of Jesse, who becomes the father of the great King David.

Like Ruth, we may have to work hard in strange and uncomfortable places purely out of love and loyalty for those who brought us there.  Through the story of Ruth, we learn that love and loyalty are honored, and that Holy plans are often worked through human desire, need and obedience.

Mary Magdalene is only mentioned twelve times in the New Testament, and eleven of these references are confined to the story of Jesus’ passion.  The location of Magdala between Nazareth and Capernaum might suggest Mary was among Jesus’ first followers.

While there is little else known about Mary Magdalene, it is her presence at Jesus’ cross and tomb that has been preserved for us in the Gospel record.  According to the Gospel of John, she is the first person to see the resurrected Jesus and the first to go to the disciples with the news of Christ rising.

Mary Magdalene is often confused with two unnamed women in the gospels: the adulterous woman of John’s Gospel (8:3-11) and the sinful woman of Luke’s Gospel (7:36-50).  While we know she is one “from whom seven demons had gone out” (Luke 8:2), we don’t actually know what these demons afflicted her with.  What we do know is that Mary Magdalene was an “apostle to the apostles” and was often seen in a place of prominence among Jesus’ women followers.

The Women of Romans

In Paul’s Letter to the Romans, he singles out ten women by name: Phoebe, Prisca, Mary, Junia, Tryphaena and Tryphosa, Persis, Julia, the mother of Rufus, and the sister of Nereus.  Following this list, several of these women are described in more detail.  We will take a quick look at two of them, Phoebe and Prisca.

Phoebe’s mythological name suggests she was a gentile and, in the absence of mention of a husband, suggests she may have been independent of a patriarchal household.  Paul’s commendation of her also implies that Phoebe had been authorized  and trusted to carry his letter to the Roman community.

Prisca is the next woman named, and she is one of the few women mentioned more than once in the New Testament.  She is always named with Aquila, who is presumed to be her husband.  The fact that her name appears first is generally interpreted as suggesting she had higher social status or greater prominence in the Christian community.

Regardless of what roles the other women played, they were indeed making history at the dawn of Christianity.

0 comments on “Leading Ladies of the Bible”

Weekly Psalms sent directly to your inbox Sign Me Up Now!