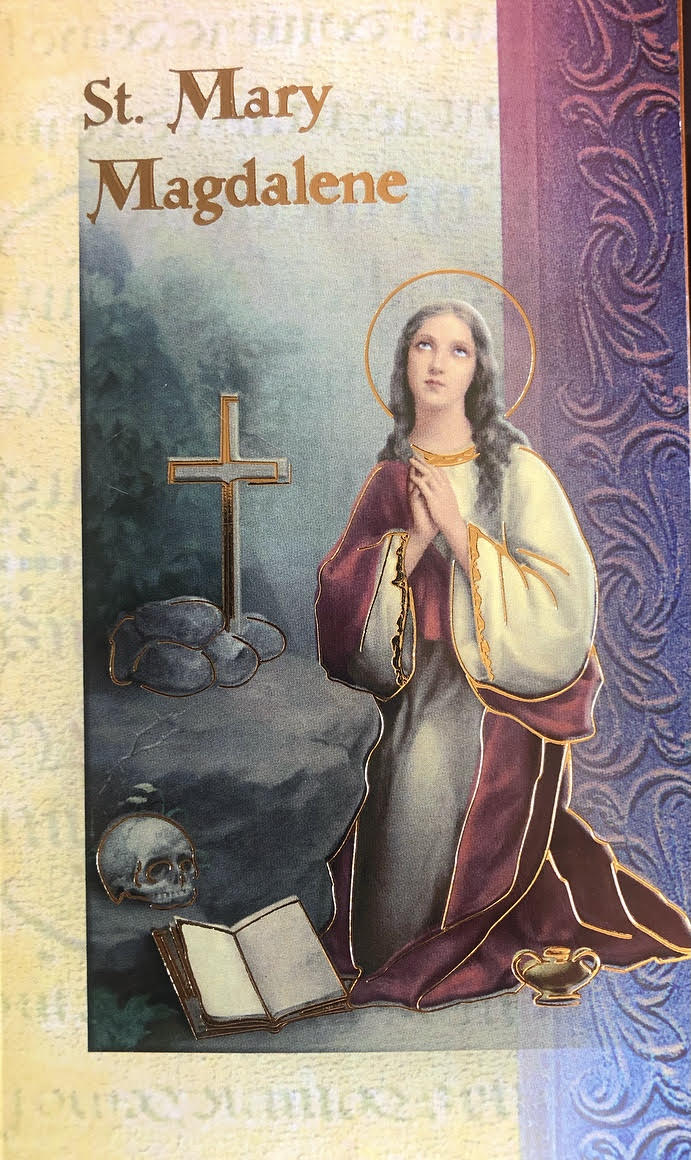 O Glorious St. Magdalene,
“model of penitents,”
obtain for me
the grace of perseverance
in the practices of self-denial
according to the Spirit
of my vows;
pray to God for me
that I may appear before Jesus
Our Lord and Master,
at the moment of my death,
with my lamp
filled with the oil of faith
and hope, and burning
with the pure flame of charity;
and thus merit to be received
with thee into
His eternal Kingdom.
Amen.

At the end of this prayer, say your prayer requests aloud for St. Mary Magdalene’s intercession.

1.) St. Mary Magdalene’s name comes from the town of Magdala in Galilee, where she was born.

2.) Scripture introduces her as a woman “who had been healed of evil spirits and infirmities: Mary, called Magdalene, from whom seven demons had gone out” (Lk. 8:2).

3.) Some scholars identify Mary Magdalene with the sinful woman who anointed the feet of Christ in the house of Simon the Pharisee (Lk. 7:36-50). Others associate her with Mary, the sister of Martha and Lazarus (Lk. 10:38-42; Jn. 11). Some believe the three are one person, while others believe they are three distinct individuals.

4.) What the Scriptures make certain about Mary Magdalene is that she was a follower of Christ, who accompanied and ministered to Him (Lk. 8:2-3). The Gospels record her as being one of the women present at Christ’s crucifixion.

5.) Mary Magdalene was the first recorded witness of the Resurrected Jesus. The Gospels all describe how Jesus appeared to her when she visited the tomb Easter morning. She did not recognize Him, however, until He said her name, “Mary!” (Jn. 20:16). Then she joyfully returned to the grieving disciples to announce the message of the Resurrection.

6.) Pope Benedict XVI referred to Mary Magdalene as “a disciple of the Lord who plays a lead role in the Gospels.” She reminds us that “a disciple of Christ is one who … has had the humility to ask for His help, has been healed by Him and has set out following closely after Him, becoming a witness of the power of His merciful love.”

7.) On June 10th, 2016, the liturgical celebration honoring St. Mary Magdalene was raised from a Memorial to a Feast (on July 22nd), putting her on par with the apostles.

Of the earlier life of Mary Magdalene we know only that she was “a woman who was a sinner.” From the depth of her degradation she raised her eyes to Jesus with sorrow, hope, and love. She said not a word, but bathed His feet with her tears, wiped them with the hair of her head, kissed them in humility, and at their touch her sins and her stain were gone. Jesus’ own divine lips gave her absolution and bade her go in peace. She stood with Our Lady and St. John at the foot of the Cross, the representative of the many who have had much forgiven.

To her first, after His blessed Mother, and through her to His apostles, Our Lord gave the certainty and witness of His resurrection. To her first He made Himself known, calling her by her name, because she was His friend. The cave in which St. Mary lived for thirty years is still seen, and the chapel on the mountain-top, in which she was caught up daily, like St. Paul, into “visions and revelations of the Lord.” When her end drew near she was drawn to a spot still marked by a “sacred pillar,” where the holy Bishop Maximin awaited her, and when she had received her Lord, she peacefully fell asleep in death.

“Most of all I imitate the behavior of Mary Magdalene for her amazing, or rather loving, audacity which delighted the heart of Jesus [and] has cast its spell upon mine” – St. Therese of Lisieux.