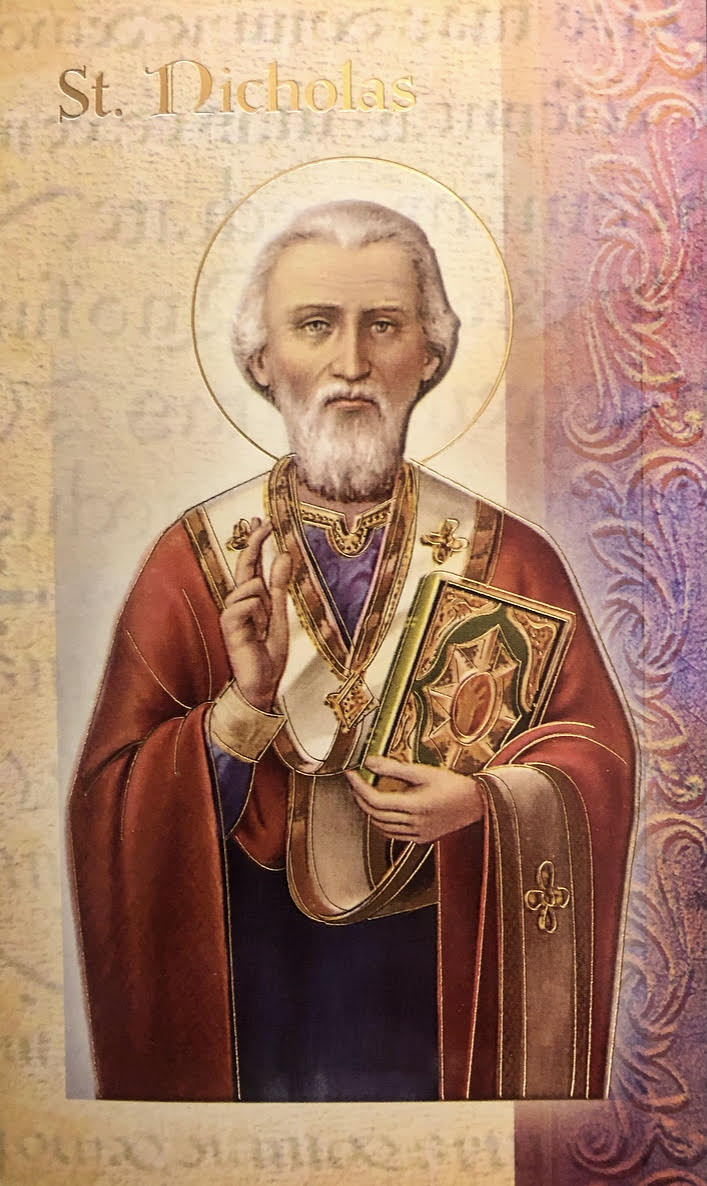 Who is the Real Santa Claus? Feast Day of Saint Nicholas

St. Nicholas was born toward the end of the third century. His uncle, the Archbishop of Myra in Lycia, ordained him a priest, and appointed him abbot of a monastery. On the death of the Archbishop, he was elected Bishop of the vacant See.

Throughout his life he retained the bright manners of his early years and showed himself the special protector of the innocent and the wronged. Nicholas once heard that a person who had fallen into poverty intended to abandon his three daughters to a life of sin. Determined, if possible, to save their innocence, the Saint went out by night, and, taking with him a bag of gold, flung it into the window of the sleeping father and hurried off.

He, on awaking, deemed the gift of godsend, and with it dowered his eldest child. The Saint, overjoyed at his success, did the same for the second daughter; but the third time, as he stole away, the father, who was watching, overtook him and kissed his feet, saying: “Nicholas, why do you conceal yourself from me? You are my helper, and the one who has delivered my soul and my daughters’ from hell.”

St. Nicholas is usually represented by the side of a barrel, where a certain man had concealed the bodies of his three children who he had killed, but who were restored to life by the Saint.

St. Nicholas died A.D. 342. His relics were transferred in 1807 to Bari, Italy, and there, after fifteen centuries, “the manna of St. Nicholas” still flows from his bones and heals all kinds of sicknesses.

O good St. Nicholas,
you who are the joy of the children,
put in my heart the spirit of childhood,
which the Gospel speaks,
and teaches me
to seed happiness around me.
You, whose feast prepares us
for Christmas,
open my faith to the mystery
of Godmade man.
You, good bishop and shepherd,
help me to find my place
in the Church
and inspire the Church
to be faithful to the Gospel.
O good Saint Nicholas,
patron of children,
sailors and the helpless,
watch over those who pray
to Jesus, your Lord and theirs,
as well as over those who
humble themselves before you.
Bring us all in reverence
to the Holy Child of Bethlehem,
when true joy and peace
are found. Amen.

Are you in need of a blessing?

Blessed Catholic gifts from the Holy Land!
All online store products are blessed in one of the most holy and historic Churches in Israel before being shipped to Psalm 91. A true blessing for you and yours! Shop Now

0 comments on “Who is the Real Santa Claus? Feast Day of Saint Nicholas”